The picture below is an example of spraddle leg because when my chick had one I freaked out and sorry my first thought wasn't to take a picture...sorry! ha! So I found one online (photo credit below) that looked like my chick. Yep it was this bad and I remember seeing something on pinterest on how to fix it with a piece of a straw and a hair tie and those two things are always in our house. I have tried another method with a baindaid but that didn't work so thought I would give this method a shot. 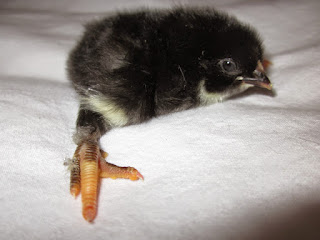 This occurred right after the chick hatched and it is rather common and doesn't mean this chick has a death sentence. Easy fix below so if you ever get in this situation maybe this fix will come to mind!

Below is my chick and his quick fix. This was so easy and yes he did pitch a fit about it but hey not like I could tell him in chick language that I was doing a good thing! This hair tie is a smaller type of tie and I still needed to wrap it around twice but it was thin too so wouldn't hinder him learning to walk right and wasn't so tight it would cut off circulation, so you might have to play around with a few different ties. The metal part of the hair tie I made sure it was in the straw and not poking him. You cut the straw just enough where the tie can come out on the other side. 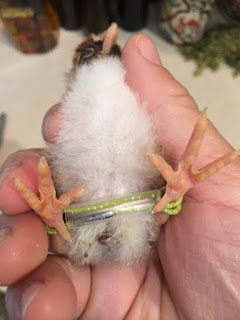 This was him right after see his leg is still a little out? I watched him walking around and he was able to walk and move around normal unlike before he wasn't able to really move around. I did put him in with the other chicks and just made sure he was moving around with them and no one was walking all over him. So if you do this and add them to other chicks make sure they are "safe." 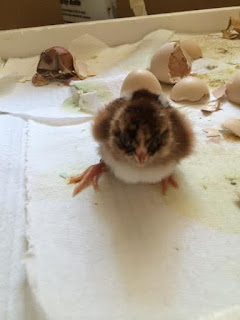 This is him 24 hours after and with the straw/hair tie removed. Much better right? He is walking around normal and doing great so yay all fixed! Thanks Pinterest hahah! 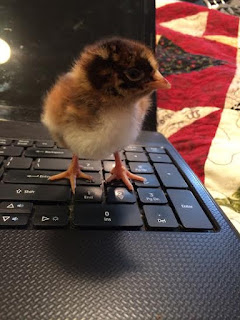