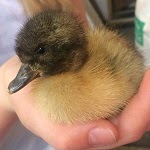 We have added ducks at Aisling Farms... 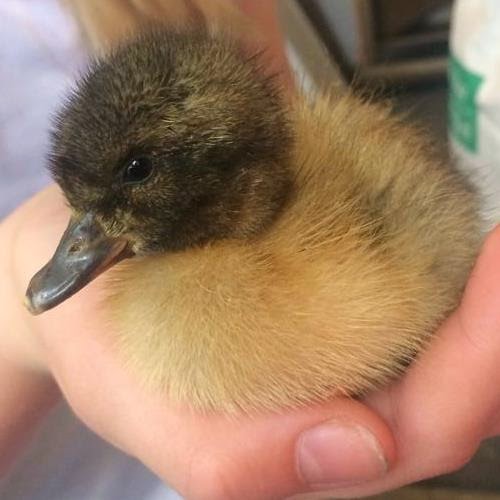 I felt they needed their own post cause they are rather fun and enjoyable to watch as they grow!
I had gotten some welsh harlequin eggs with a possibly swedish egg in there and a few muscovy eggs. The muscovies didn't hatch and the welsh, only two girls hatched and rest were boys so ended with 9. They are awfully cute at hatch. I had two black and yellow ones hatch so those are my swedish mixes therefore I am unsure on sexing of them so those will stick around for awhile til I know what sex they are. 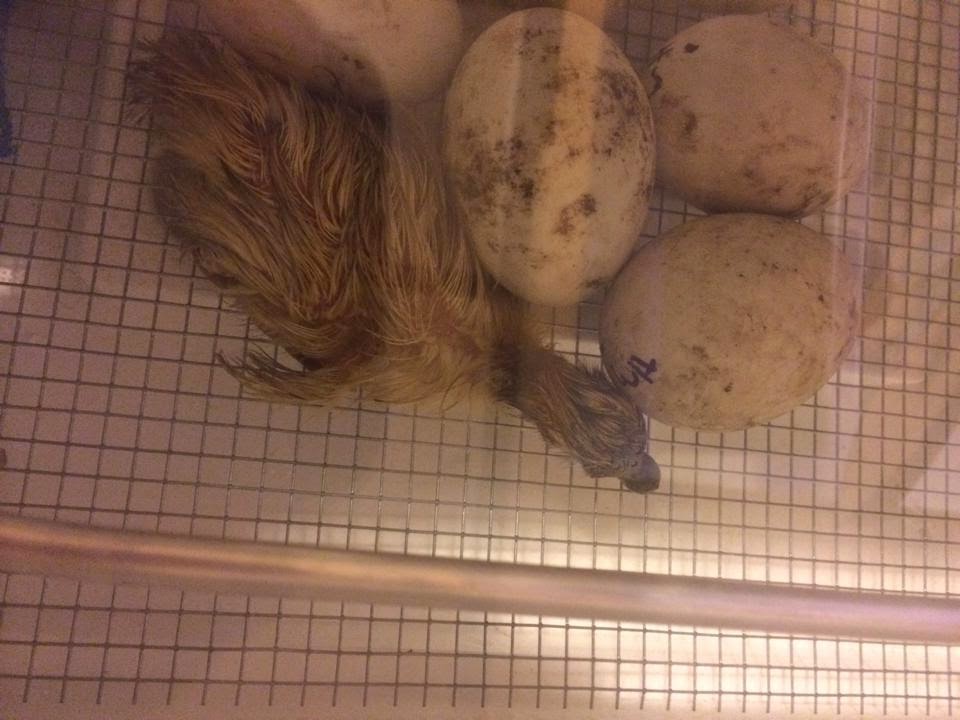 They like to be really tucked in and snuggled. Here are some of the snuggles we gave them after they were hatched out. 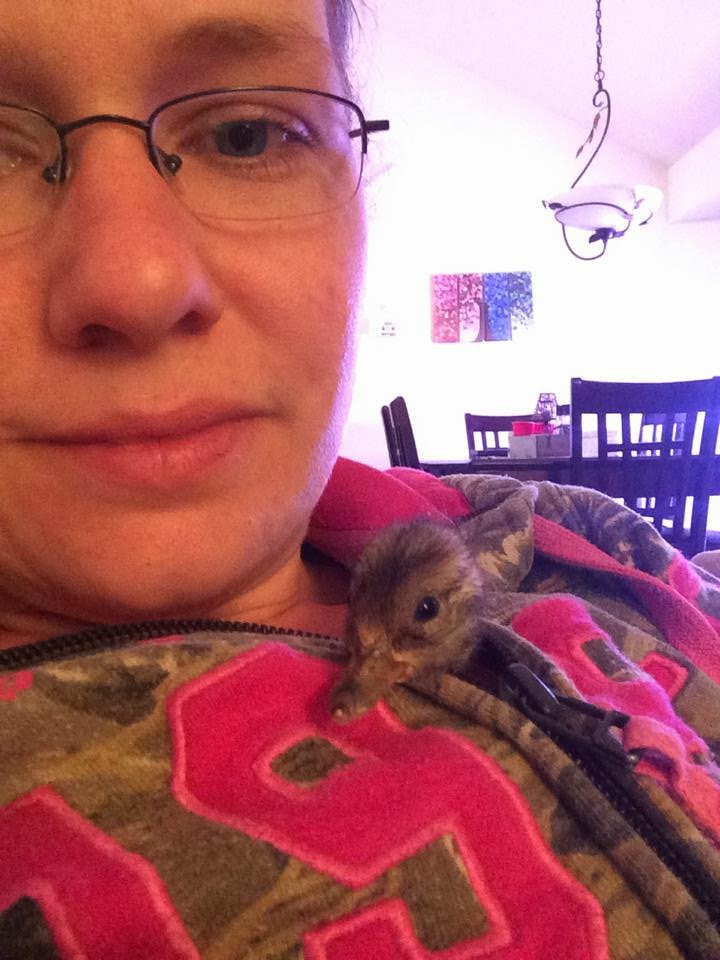 They really liked to "groom" my husband's beard and then snuggle under it. He stated that he liked ducks more than chicks...not sure why? They are quieter once they are together and snuggled but they dont like to be singled out at all! They need a "buddy." 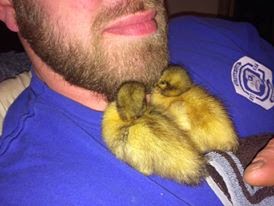 They back up to poop which is funny to watch so you get a quick warning but not quick enough to do much about it.

Only my husband can make them talk with the noise he makes in this video.

This one was rather content on his shoulder, before it pooped ha! 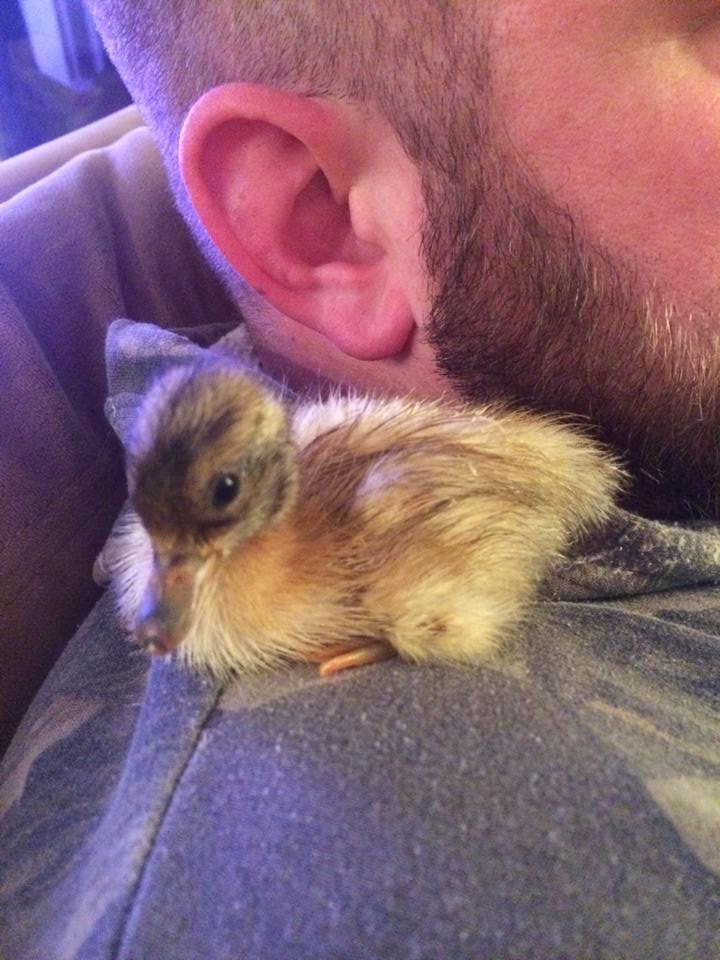 Here is one of the black ones. 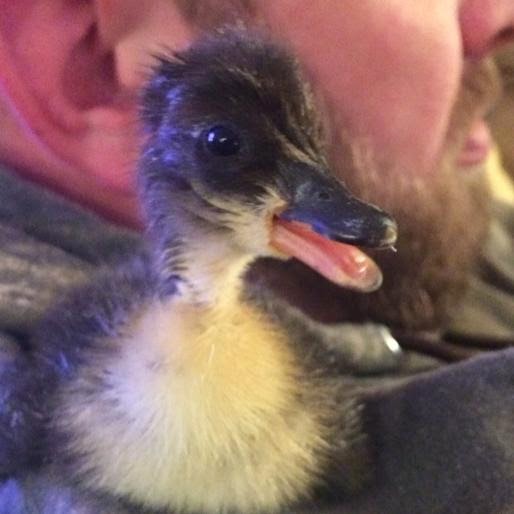 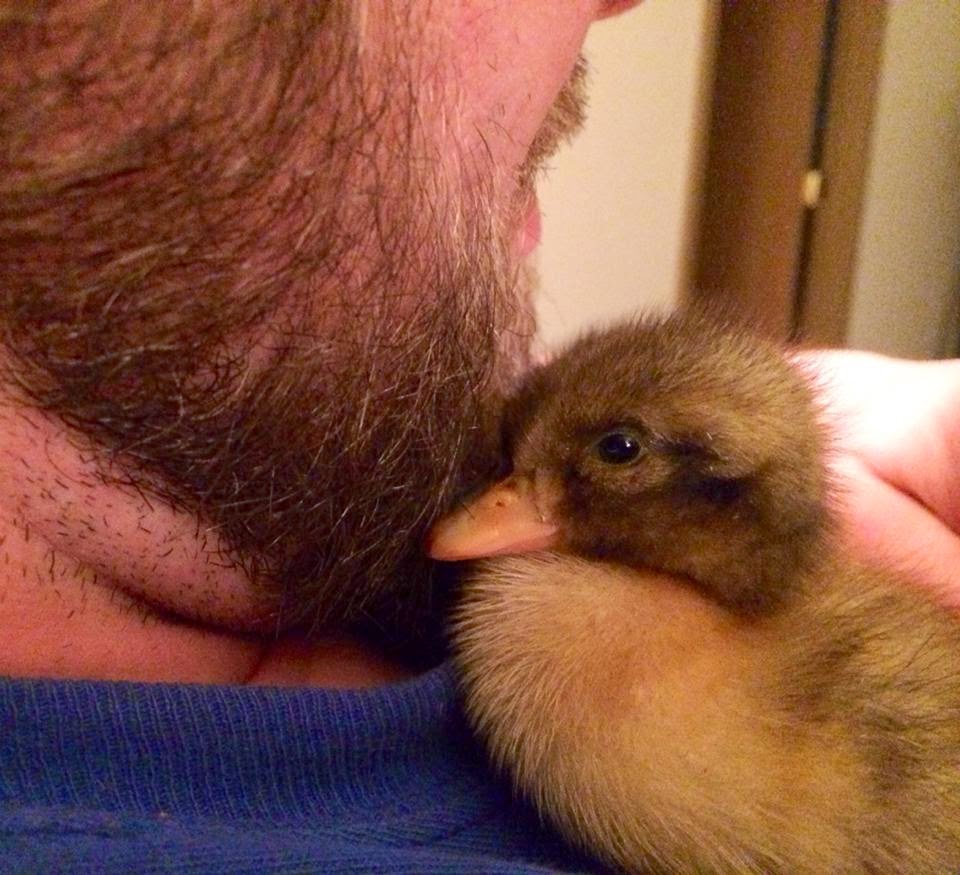 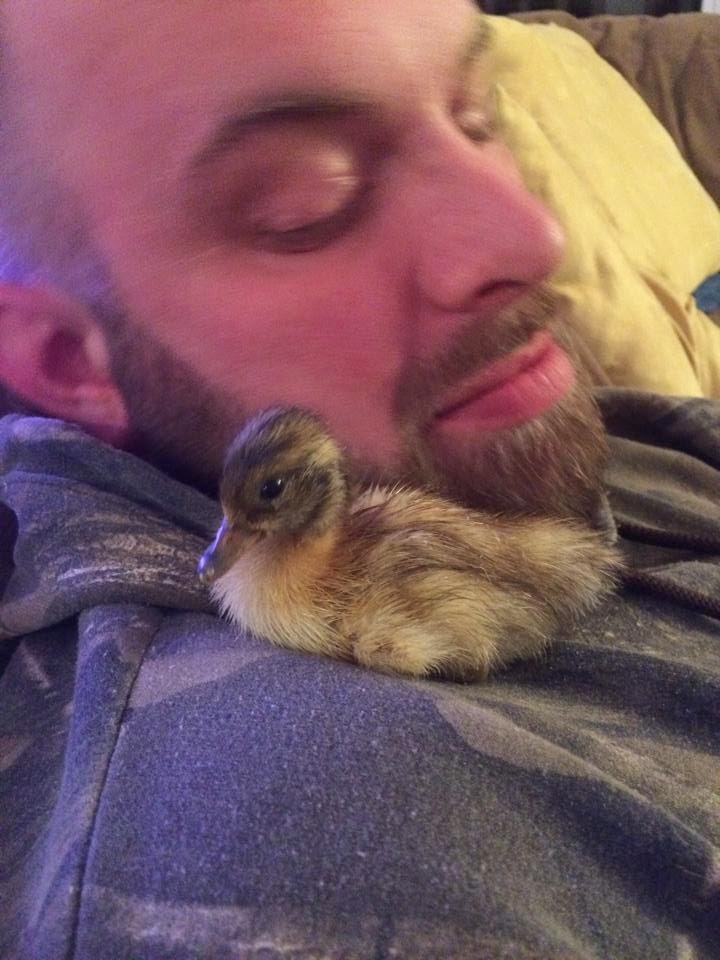 This was just the other day! They are growing fast! 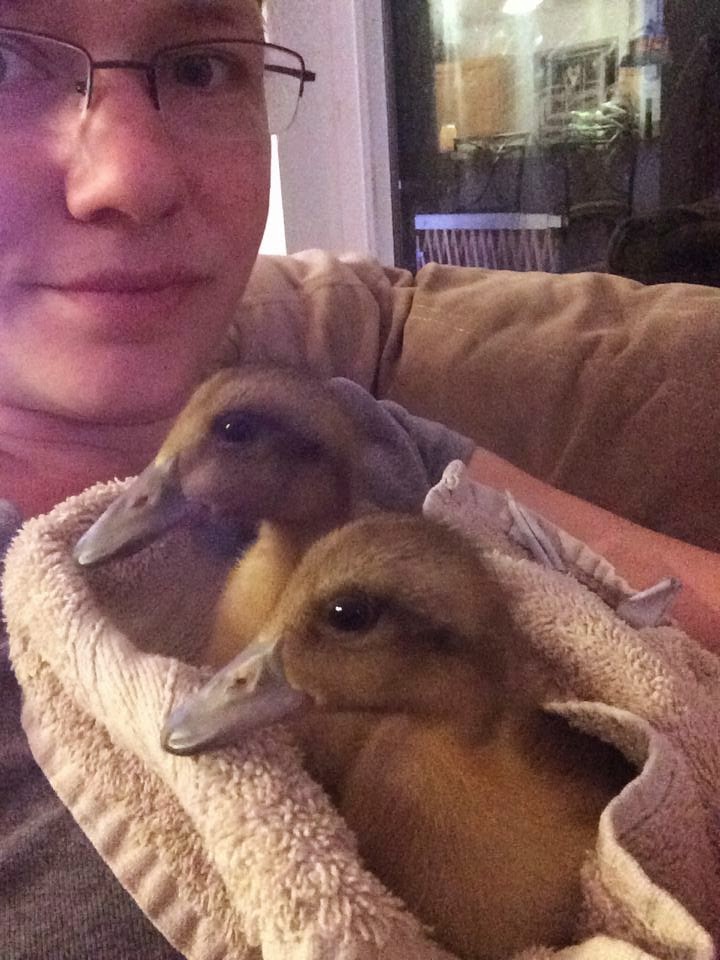 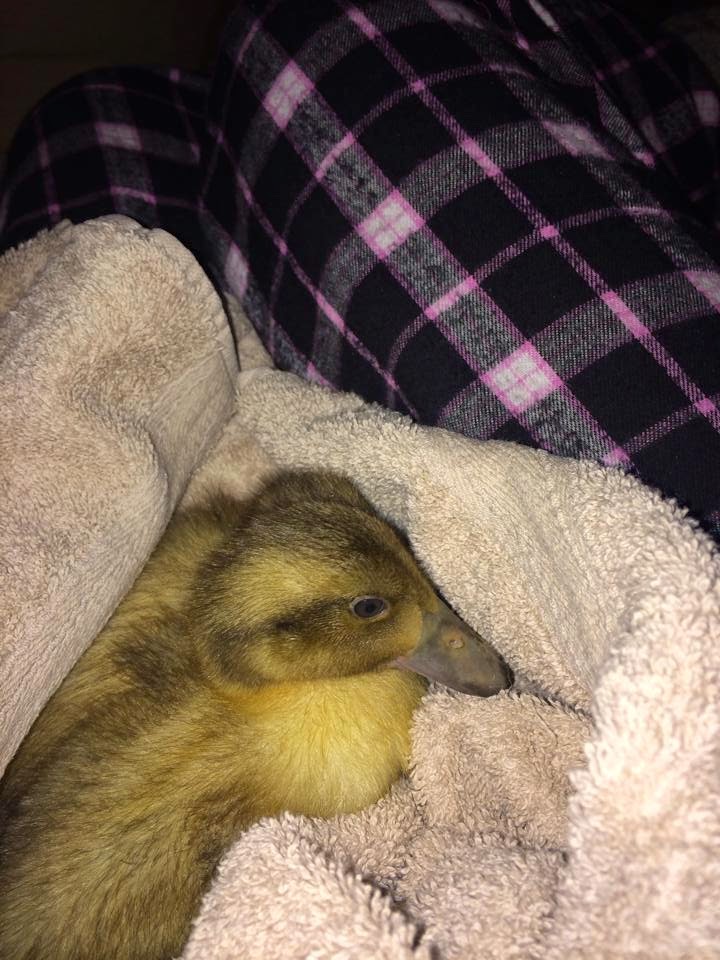 This is their first swimming experience in our laundry room sink. This is my favorite part about ducks is watching them swim.
(Direct Link to video: https://youtu.be/MyfbPtmK4VU )

The weather has become super nice here so I am starting to put them out during the day and then before dinner I clean up the brooder and put them back in the brooder for the night. This helps for me to have less clean up and refilling of their waters cause they go through water like crazy!

I upgraded them to the sand box that we had cause the sand was gross and wet so needed to be dumped anyways. I have a friend that is giving me a kiddie pool which is probably what they will end up just using all the time once they are officially moved out of the brooder.This one poor black one was trying to hard to figure out how to climb in, it was rather cute!

He finally figured it out and was enjoying his nice little swim!
(Direct Link to video: https://youtu.be/1JVt5TkGeV8 )
Once they are outside permanently they will actually join some chicks in the grow out coop til they get full size and then will go to the main coop. They have a laying spot at the base of the nest boxes and I have plans to build them a little outdoor space of their own but I am sure the chickens will want to hang out there too. This is all we plan on having because I wanted some slug control on this property plus just the enjoyment factor on having ducks. Alot of people dont want the "mess" but if you set up properly and make it where their "pool" is something you can easily dump and refill they dont seem to be that messy so far. They poop as much as chickens do so that wont bother me cause I am use to picking up poo ha! I am enjoying them and glad they are an addition onto our farm!