Why I Decided To Homeschool...

Summer is going fast and yes school is starting to be a buzz word around this house! HOMESCHOOLING has become the new word though and talk amongst this family! 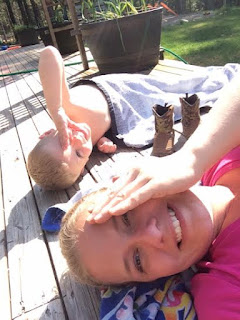 Yes, this is definitely one of those things that I have said many times I would NEVER and I mean NEVER do and here I am doing it. I had friends do it and I thought they were crazy! Why on earth would you choose to keep your little monsters home all day when you can easily just ship them off to the public schools all day! I would then have free time all day! This was my thinking but mainly because my first child, my daughter, I never had school issues or concerns. She just kind of did it all like she was taught and/or told. Was kind of smooth sailing for her and still is so no need to really worry about her...not yet at least! (She will be a teenager soon so I might be eating my words real soon!)

My middle child, my son Hunter, went to a private christian preschool last year and did great! He is very social and made tons of friends and enjoyed going to school. I kept wondering though based on how his maturity level was compared to some of the other kids if he was ready for ALL DAY kinder. All day is ALOT for a five year old to partake in because just with him going for three hours a day, four days a week for preschool he was still getting cranky, tired and sometimes needed a nap.

There was an "open house" at the "new school" he just wasn't as into it or excited and actually very standoffish. This made me really start to think and wonder if going forward to public school was a good thing. I thought, if anything, my plan would be to enroll him and see how he does and maybe just hold him back to repeat kinder but then how would that make him feel as his friends progressed and he didn't. My other concern was if the teachers had enough time to deal with a child that has good days and very bad days for no reason. His frustration level is different and he does have bouts of stuttering as well and I am able to let him take a break and release some of that frustration and also give him the time he needs to speak. Would the school take this type of time with him? The schools are a bit more structured, even kinder to a certain extent and might not be able to tend to one kid out of the 30+ they will have in their classroom. This could cause his learning to actually become hindered and not progress as much as he could potentially. So, after going over all the pros and cons I went with my mommy gut!

A friend mentioned why not just wait a year to even enroll him in the first place. I teach him and progress him as a normal kinder and see where he/we are at in a year. I kind of said "duh" to myself as I never thought of doing it THIS way instead! Kids can grow alot in a year! Who knows maybe I will enjoy it and want to continue, but for now I need to take it one year at a time and I am really looking forward to it! We have already been starting to prep for the coming year!1

I will also be incorporating into our daily/weekly lessons the bible and stories from the bible. We got this new prayer request chalkboard which he will do nightly and it stays in his room on his toy box. Here is what he had me write down tonight. 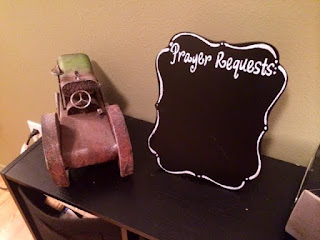 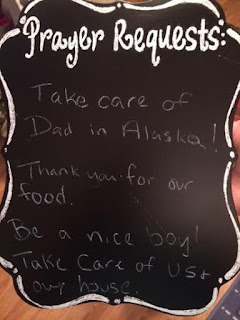 We found some new "Bob books" at Costco along with National Geographic Kids books which are readers for him as well. He loves them of course cause they talk about trains, planes, race cars etc. 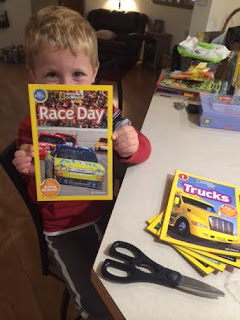 We added a state and world map in his room and also visited the awesome hobby lobby store and got a chalkboard that both him and his brother can play around on but also can be used for school stuff. 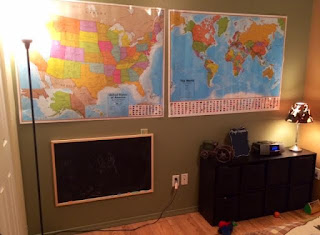 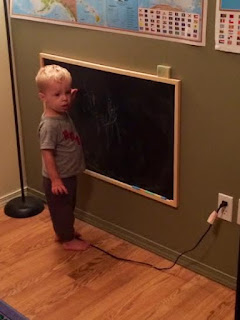 So as you can see we are starting to really get ready to do this! As far as curriculum, I have a few things in mind, which I will share once I make my final choice on that matter. I want to have it be a fun learning experience though for him, along with his brother being able to learn a bit himself as we do this all together. There are some great resources online so in each post I will be sure to fill up the resource list for those that want to follow along on this journey with us! Pray for us as we embark on this adventures!