Homeschooling: Let's Start With Behavior...
Behavior and Rewards
So a big thing or I should say a GOAL of mine for homeschooling our son is that I really want to work on his frustration level he skyrockets to rather quickly. I want him to learn ways to cope with over stimulation and his response to guidance, direction or a task and just to us as the parents and his siblings. All summer we have been doing where he needs five "stars" before he can have his toys, tv, games etc and once he earns those then he has his "free time."

So in prepping for homeschooling I found these cute little super hero themed "kapows" aka stars and these super hero punch cards on the website teacherspayteachers.com (great website btw for homeschooling items). I just got some contact paper and laminated the "kapows" and the actual punch cards I took to Kinkos and had them laminate them so they are a bit tougher and added them onto a ring. These hang on our fridge. 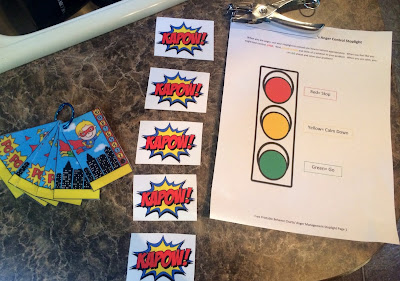 He gets a Kapow when he takes the time to use his "stoplight" calming techniques which is also new but a good visual thing that we have hanging on our fridge. So when he starts to get frustrated we say remember your stop light...he even told me this one time when I was getting frustrated! We went over what each light means and some ways to "calm" down in order to get to a "green light" so that we can proceed with our day happily. 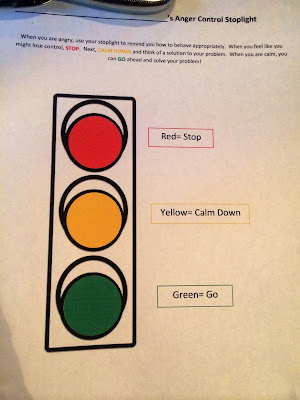 Throughout the day I will remind him when needed or point to the stoplight. As I see good behavior, helpfulness around the farm, sharing, paying attention, doing what is asked etc I will let him know he earned a "kapow." He also earns them by doing pieces of his school work which is usually how he obtains them but he can loos them rather quickly if we are having a bad day. I will take them away if he doesn't control himself and isn't following the rules of how to respond and act. 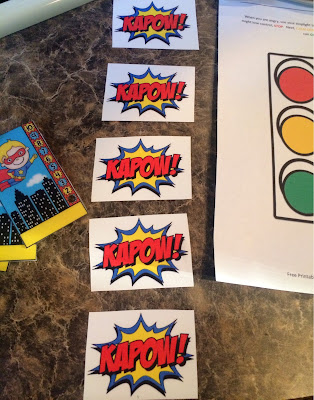 If he has all five "kapows" at the end of the day, usually during bedtime routine, then he gets a hole punch. If they aren't all five there then the next morning we do start all over with none. He sometimes will ask for me to give him tasks/chores to do around the house to earn a "kapow" but for the most part I "catch" him being good and let him know I was proud of him.

Once he gets 10 hole punches he gets to pick a special treat under $5 whether it be ice cream, just the $5 to take to the dollar store etc. 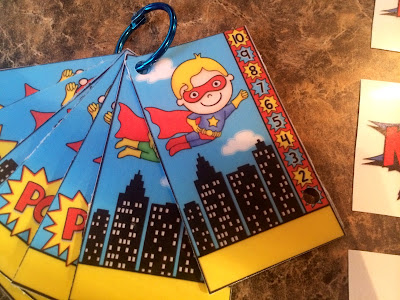 This took a bit to get use to and still I tend to forget about the hole punches but I do notice how much it really helps him in kind of doing a self check on himself and how he is acting. He really wants his 10 hole punches and he earned his first full punched card today! 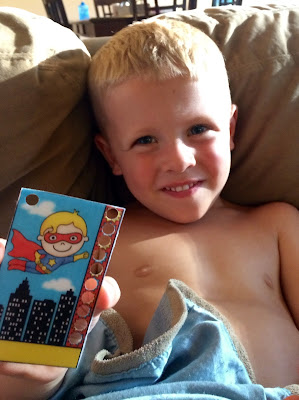 He was rather excited and he is turning this card in for some ice cream which he will pick out tomorrow at the store. It actually didn't take only 10 days to earn these punches, we did have some bad days and it took about two weeks.

Each child is so different in how they respond and for him this works and I think it is really helping and he really likes it. I think he likes that sense of accomplishment and reward as well, but who doesn't! Gotta get kids excited about acting good! This is a great way to reward visually good behavior and he will do a check about once a day to count how many he has so far so I know he is thinking about it.