Well, hubby kicked me out of the garage...his half garage I should say. He was tired of the smell even though I never smelled them that much and he really was sick of having his garage items in a metal 8x10 shed. He decided to let me have the shed all to myself and my chicks if I gave him back his garage space. He "pitched" the idea to me and well sounded good. I told him my worries like how were we going to heat it, safety wasn't an issue and how on earth was I going to clean it since standing up fully straight isn't an option.

So his "vacation" home he cleared the shed and we talked about the design and what we could do with using the resources we had here on the farm. So here is the "before" shot of the shed all empty. 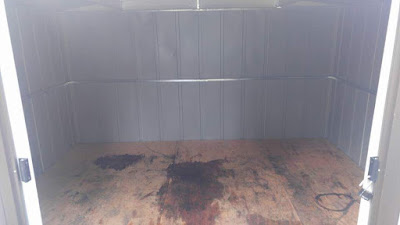 My dad had dropped off this huge metal contraption that was a mess up order for his HVAC company. I love the fact of my brooder being all metal cause one the heat will be contained in there and two easy clean up and no molding or melting issues.

Here is the after. Sorry I lacked in the "during" pics cause well he worked on this while I did school with our son ha! So I can technically divide this into three sections and it is rather big. 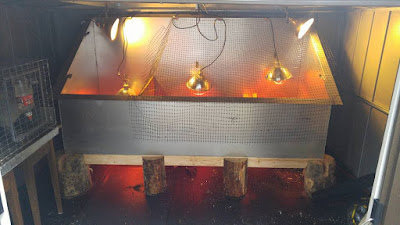 We raised this metal contraption off the ground with rounds from our property that my hubby chainsawed grooves into so the 2.x4's would fit snug down into them to create a sturdy base. The floor I put down is the same "runner" material which is like a grooved plastic and I use this for my mats in front of my rabbit hutches and underneath where their pee and poop drops down. It is durable and the poop is going to fall through 1/2" flooring that the chicks are on and I just sweep it out of the shed and outside. Super easy cause I did it today in like 2 minutes! Plus chick poop is so little! 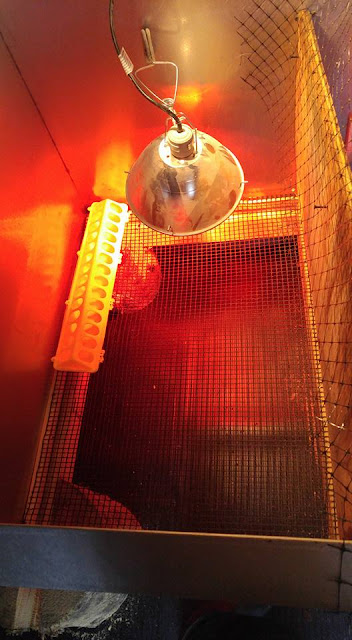 Above is where the new chicks will go. I will be adding their own water brooder nipple and also will add in a little pan for them to jump in and scratch around in to keep them busy.

Below this shows how we did the roosts  which can come out and be cleaned off between each "season" and the netting is above these chickens because of the weather I have kept them in the brooder longer than I typically would. The weather being so wet just kept them inside for now out of the crazy rain and snow we have had this season. They seem to like it and was good to test it out. To the left that ply wood divider hubby made it where I can remove it and then he is going to make me a second divider to make three separate spaces if I need. 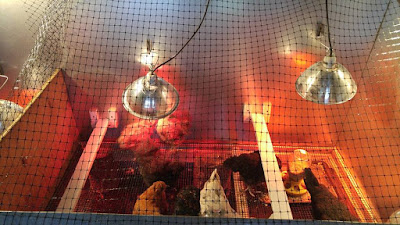 I will be adding "scratch trays" in this area as well to keep them busy. These birds will be moving out soon though.They seem to like it and it was nice and cozy in there with the heat lamps. 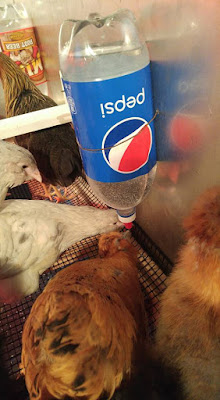 Here they are drinking from their nice clean water since I use brooder bottle caps from "The Chicken Fountain". Man this makes giving chicks water so much easier and so much cleaner! No poopy water!


I have their food on cookie sheets which makes it where they cant just toss it on the ground and then they like to scratch and kick around pecking at the pieces on the pan. Will add a couple more of these. 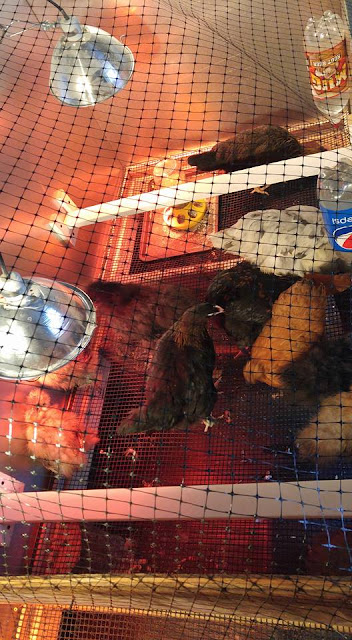 I am happy with this design and will be out of the way and an easy clean up for me as well. Also, the chicks wont be as susceptible to cocci and eating their own poop which grosses me out. I will also be spending way less on pine shavings. The chicks obviously wont stay here long since most are pre orders but maybe I will hatch a few more for myself so this space doesnt go to waste ha!

I am now able to store all my "chicken stuff" in this shed as well and I have a couple of rabbit hutches where I can keep chickens that have been hurt or need "time outs." I have one of my lavender orpington girls in one right now because she is a bit bigger than these other birds so she gets her own "room."